Spaced Repetition: A Hack To Make Your Brain Remember Anything

What would you like to learn? Perhaps you dream of speaking three languages fluently, or maybe you want to learn how to code? Imagine if you could learn that in record speed, using only a simple review for iOS app. Well, it’s actually possible with Spaced Repetition.

This article explains how you can learn anything you want using a study technique called spaced repetition.

Many successful learners have praised the benefits of spaced repetition:

In this article, we’ll cover:

What is Spaced Repetition? Spaced repetition is a scientifically proven learning technique that seeks to solve the problem of forgetting. It works by reminding you of important information at the moment you are about to forget it. Spaced repetition builds on two scientific concepts: The Forgetting Curve and The Spacing Effect.

Research have found that you will naturally forget new information after some time. The amount of time it takes for you to forget information can be illustrated by the forgetting curve – developed by German psychologist Herman Ebbinghaus in 1885.

According to The Forgetting Curve, you will forget more than 60% of what you study after 9 hours. In other words, reading something you want to remember only once is extremely ineffective. 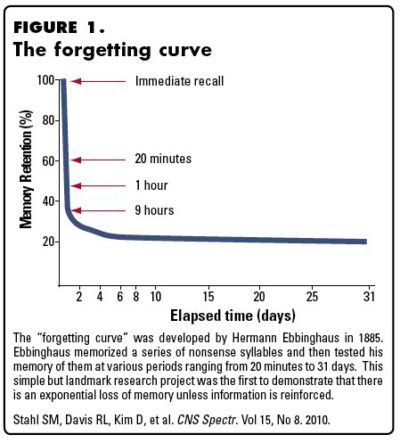 With knowledge of The Forgetting Curve, Ebbinghaus asked:

Given the decrease of memory over time, what effect would repetition have on memory?

In order to answer this, he came up with the The Spacing Effect theory.

The Spacing Effect theory suggests that learning is more effective when studying is spread out over time, as opposed to only study something once. It explains that “cramming” the night before an exam is not as effective as repeatedly reviewing information over a longer time period.

Moreover, The Spacing Effect also proves that long term memory is improved by spacing out learnings.

Combined, The Forgetting Curve and The Spacing Effect makes up the fundamental concepts of Spaced Repetition. The theory of Spaced Repetition suggests an optimal repetition schedule for maximizing learning and memory. According to memory expert and author Piotr Woźniak, the perfect schedule is defined by two insights: By spacing out your learnings according to a specific repetition schedule, you will be able to learn faster and remember it longer. That is why spaced repetition has been referred to as “one of the most powerful methods for remembering what you learn” (Carrey – How we learn).

How To Hack Your Brain Have you ever thought about how your brain manages all memories?

It is easy to think of your brain as a computer that stores all information you’re telling it to. However, that analogy is not accurate at all.

In comparison with a computer, your brain does not store memories in directories or files. Rather, memories in the brain are saved in many different regions of the brain, and requires the brain to fire in the right way to retrieve them.

Clearly, your brain has limitations that a computer does not have. If you want to hack your brain to store more information, you must work with these limitations – not against them.

Forgetting Is An Important Part of Learning

Science tells us that the brain needs effort in order for new neural connections to solidify and make up memories. Science also tells us that we first need to forget information before we can remember it. In his book How We Learn, memory expert Benedict Carey states:

“Some amount of breakdown must occur for us to strengthen learning when we revisit learning material. Without a little forgetting, you get no benefit from further study. It is what allows memories to build, like an exercise muscle.”

In other words, memories are strengthened by things we encounter regularly and frequently. That is also why Spaced repetition works so well. By repeating new information at the point when we start to forget it, Spaced repetition forces your brain to improve the connection between nerve cells.

Consequently, by reviewing newly learned information according to a schedule, you allow your brain to store and retrieve more information. Perhaps one of the best and easiest-to-use apps on the market is Spaced for iOS. With spaced, you can add any learning you want to remember, and the app then takes care of the rest.  The app will automatically remind you according to a perfect Spaced repetition schedule. All you have to do is activating push notifications, and you’re all set. It has never been easier to hack your brain!